A bird count was conducted in Zoarvlei section of the Table Bay Nature Reserve in November. Among the birds observed were Egyptian goose, Yellowbilled ducks, Cape teal, Common moorhen, Blacksmith lapwing, Kelp gull, Hartlaub’s gull, Masked weaver and Cape wagtail. During the last quarter of 2020 white-faced whistling ducks, not often observed at Zoarvlei, were observed cleaning themselves and enjoying clear water in the Zoarvlei canal. 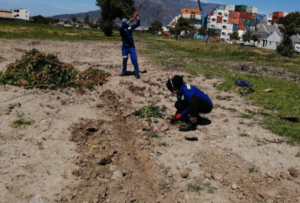 ern section of the Zoarvlei wetland to prevent soil erosion, re-establish nutrients on disturbed soil for rehabilitation and to reintroduce the plant species for ground cover. The decaying leaves of C. edulis is spread around to enrich the soil and condition it for planting other species as well. This is a trial method, however, if the project proves successful, it will be implemented on other parts of the Nature Reserve for restoration purposes.

Catching up with our River Ambassadors

A visit from the 1st Milnerton SeaScout Cubs
Scroll to top